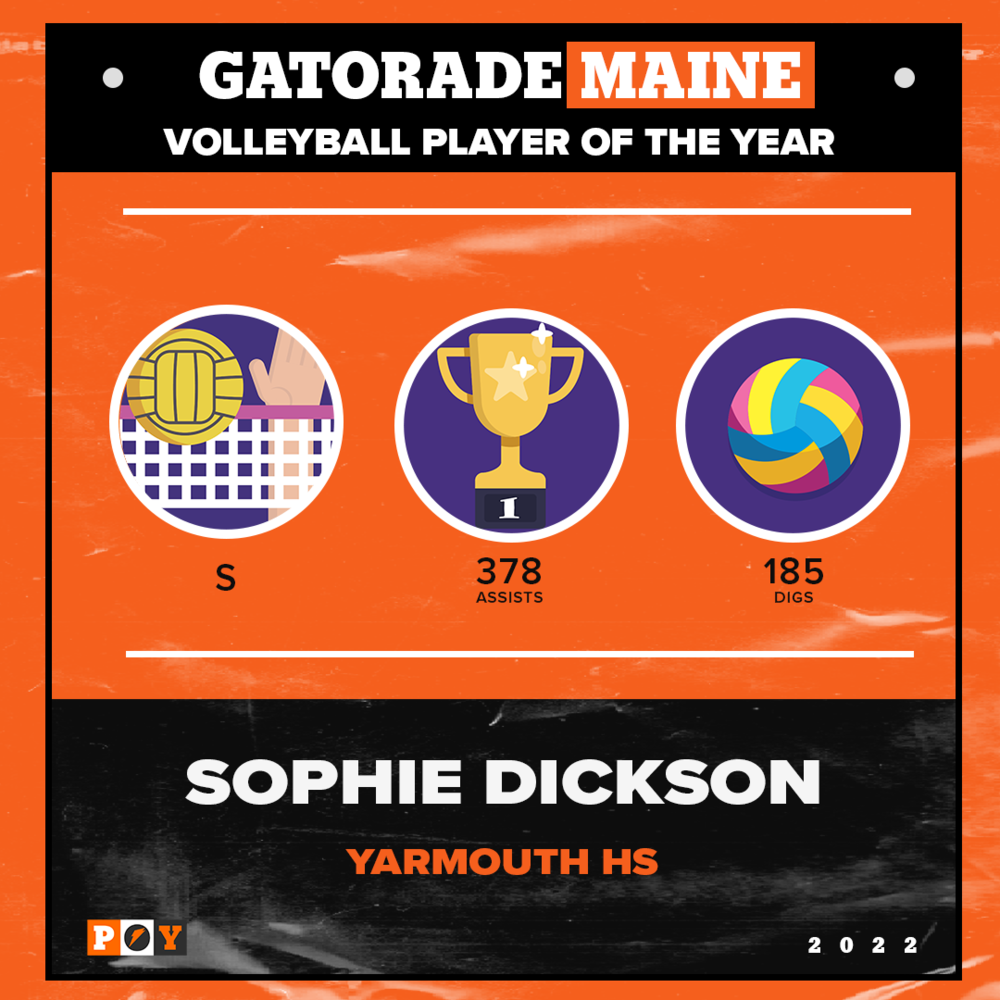 CHICAGO (January 11, 2022) — In its 37th year of honoring the nation’s best high school athletes, Gatorade today announced Sophie Dickson of Yarmouth High School is the 2021-22 Gatorade Maine Volleyball Player of the Year. Dickson is the first Gatorade Maine Volleyball Player of the Year to be chosen from Yarmouth High School. The award, which recognizes not only outstanding athletic excellence, but also high standards of academic achievement and exemplary character demonstrated on and off the court, distinguishes Dickson as Maine’s best high school volleyball player. Now a finalist for the prestigious Gatorade National Volleyball Player of the Year award to be announced in January, Dickson joins an elite alumni association of state award-winners, including USA Volleyball players Kayla Banwarth (2006-07, Wahlert High School, Iowa), Alisha Glass (2005-06, Leland Public High School, Mich.), Jordan Larson (2004-05, Logan View High School, Neb.) and Foluke Akinradewo (2004-05, St. Thomas High School, Fla.).
The 5-foot-1 senior setter led the Clippers to a 17-0 record and the Class B state championship this past season.  Dickson recorded 378 assists, 185 digs and 37 service aces. A Varsity Maine All-State honoree, she was also a Western Maine Conference First Team selection and was named to the AVCA All-America watchlist.

Dickson has served as a mentor for middle school athletes and has volunteered locally on behalf of youth volleyball camps. “Sophie Dickson makes everyone around her better,” said Larry Nichols, head coach at Falmouth High School. “Without her, Yarmouth couldn’t have won a state title. Balls that shouldn’t be playable, she makes playable. And, she has a tremendous game IQ.”
Dickson has maintained an A average in the classroom. She remains undecided upon a collegiate destination. The Gatorade Player of the Year program annually recognizes one winner in the District of Columbia and each of the 50 states that sanction high school football, girls volleyball, boys and girls cross country, boys and girls basketball, boys and girls soccer, baseball, softball, and boys and girls track & field, and awards one National Player of the Year in each sport. The selection process is administered by the Gatorade Player of the Year Selection Committee, which leverages experts including coaches, scouts, media and others as sources to help evaluate and determine the state winners in each sport. Dickson joins recent Gatorade Maine Volleyball Players of the Year Annika Hester (2020-21, 2019-20 & 2018-19, Falmouth High School) and Molly Mawhinney (2017-18, South Portland High School), among the state’s list of former award winners.
Gatorade has a long-standing history of serving athlete communities and understands how sports instill valuable lifelong skills on and off the field. Through Gatorade’s “Play it Forward” platform, Dickson has the opportunity to award a $1,000 grant to a local or national organization of their choosing that helps young athletes realize the benefits of playing sports. Dickson is also eligible to submit a short video explaining why the organization they chose is deserving of one of twelve $10,000 spotlight grants, which will be announced throughout the year. To date, Gatorade Player of the Year winners’ grants have totaled more than $3.5 million across more than 1,300 organizations.

Since the program’s inception in 1985, Gatorade Player of the Year award recipients have won hundreds of professional and college championships, and many have also turned into pillars in their communities, becoming coaches, business owners and educators.

To learn more about the Gatorade Player of the Year program, check out past winners or to nominate student-athletes, visit playeroftheyear.gatorade.com or follow us on social media on Facebook at facebook.com/GatoradePOY, Instagram at instagram.com/Gatorade and Twitter at twitter.com/Gatorade.