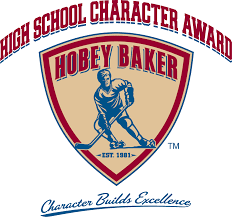 Each year, a single senior hockey player from each participating high school is selected by his or her coach and celebrated by teammates, the school, and the community for outstanding individual performance on and off the ice.  Established in 2003, the award honors high school hockey players who exemplify the Hobey Baker ideal that "Character Builds Excellence." The Hobey Baker committee believes that character makes the game better and makes our players better.  Candidates for the High School Hobey Baker Award are selected by their coaches, based on coach-ability, strength of character, integrity, commitment, teamwork, community leadership, and outstanding sportsmanship.

“I am proud to announce this year’s winners and excited to recognize their character, commitment, and love of the game” said Vin Contento, Maine Director of the Hobey Baker High School Character Award.  Hobey Baker not only excelled in hockey, but in football as well at the collegiate level.  He had a tradition of making his way to his opponent’s locker room to shake their hands after each contest.  He despised dirty play and was penalized only twice in his college career.  “While Hobey Baker was a legendary athlete, he was also a true gentlemen.  It’s important to recognize the same values and traits in these high school athletes and not just their on-ice abilities”, Contento said.

Among the winners announced today were 16 girls and 33 boys from participating teams across the state.  Winners receive a personalized commemorative plaque – and a distinction shared by some of the top players to ever hit the ice: Hobey Baker winner.

This year’s award winners appear on page 2 and 3.

Please contact Vin Contento if you have additional questions.  Thank you.