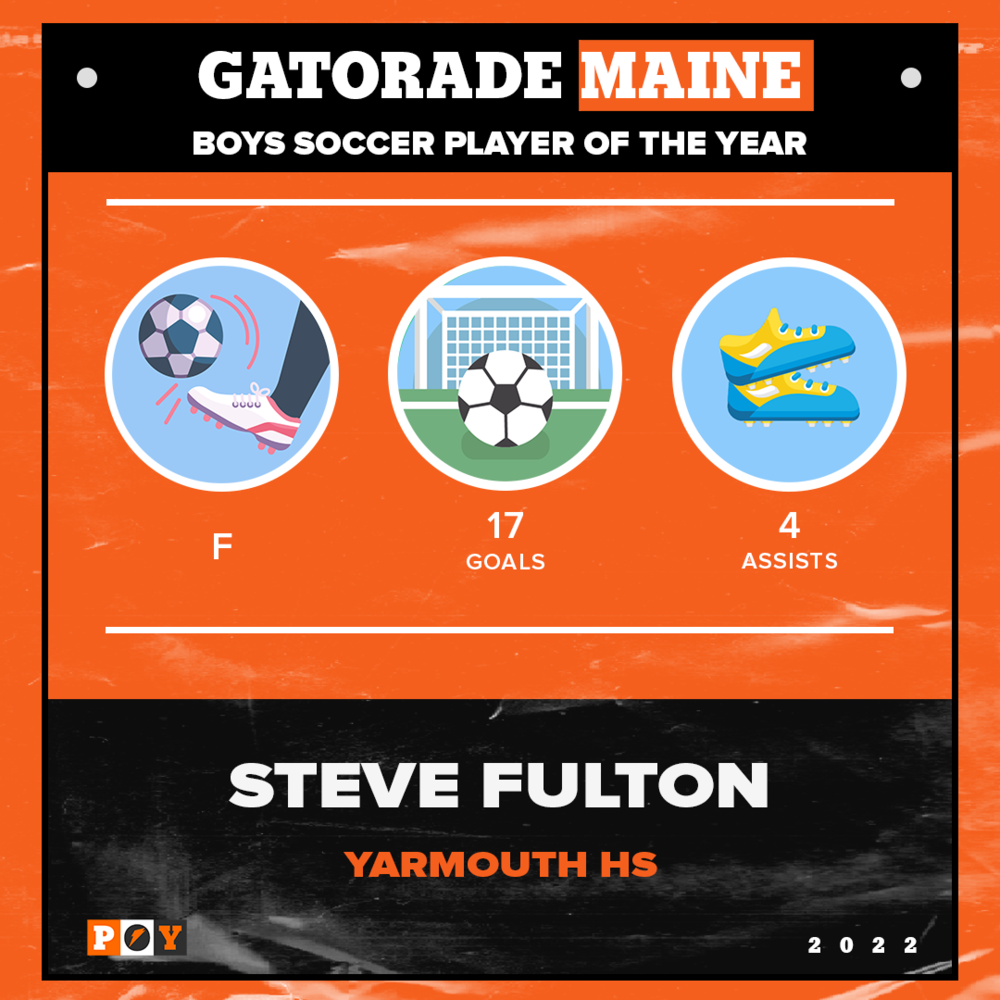 The 6-foot-1, 185-pound senior forward scored 17 goals and passed for four assists this past season, leading the Clippers (17-0-2) to the Class B state championship. The Class B Player of the Year, Fulton is a United Soccer Coaches All-American. He was also named the Portland Press Herald Player of the Year. Also a lacrosse standout, Fulton has volunteered locally on behalf of youth soccer programs. “Fulton is one of the most fundamentally sound players I’ve seen in years,” said Bob Strong, head coach at Freeport High School. “He’s selfless, focused, a leader. He plays with the sole purpose of putting his team in a position to win.”

Fulton has maintained an A average in the classroom. He will attend Providence College this fall.
The Gatorade Player of the Year program annually recognizes one winner in the District of Columbia and each of the 50 states that sanction high school football, girls volleyball, boys and girls cross country, boys and girls basketball, boys and girls soccer, baseball, softball, and boys and girls track & field, and awards one National Player of the Year in each sport. The selection process is administered by the Gatorade Player of the Year Selection Committee, which leverages experts including coaches, scouts, media and others as sources to help evaluate and determine the state winners in each sport. Fulton joins recent Gatorade Maine Boys Soccer Players of the Year Gus Ford (2020-21, Falmouth High School), Bilal Hersi (2019-20 & 2018-19, Lewiston High School), and Michael Tahiru (2017-18, Hebron Academy), are among the state’s list of former award winners.

Gatorade has a long-standing history of serving athlete communities and understands how sports instill valuable lifelong skills on and off the field. Through Gatorade’s “Play it Forward” platform, Fulton has the opportunity to award a $1,000 grant to a local or national organization of their choosing that helps young athletes realize the benefits of playing sports. Fulton is also eligible to submit a short video explaining why the organization they chose is deserving of one of twelve $10,000 spotlight grants, which will be announced throughout the year. To date, Gatorade Player of the Year winners’ grants have totaled more than $3.5 million across more than 1,300 organizations.  Since the program’s inception in 1985, Gatorade Player of the Year award recipients have won hundreds of professional and college championships, and many have also turned into pillars in their communities, becoming coaches, business owners and educators.

To learn more about the Gatorade Player of the Year program, check out past winners or to nominate student-athletes, visit playeroftheyear.gatorade.com or follow us on social media on Facebook at facebook.com/GatoradePOY, Instagram at instagram.com/Gatorade and Twitter at twitter.com/Gatorade.